So, I’ve been tenured for a couple of weeks now. Here’s what I’ve been up to:

1. We bought a new car! It’s a 2013 Mazda 5. Our 1999 Saturn has been on its last legs for quite some time, up to and including making a bit of a death rattle on the way to the dealership.  (We tend to work on the buy-new-drive-until-dead model of car ownership). The Saturn served us well: 155,500 miles in ~13 years, with no major mechanical problems until last year or so, only routine maintenance. 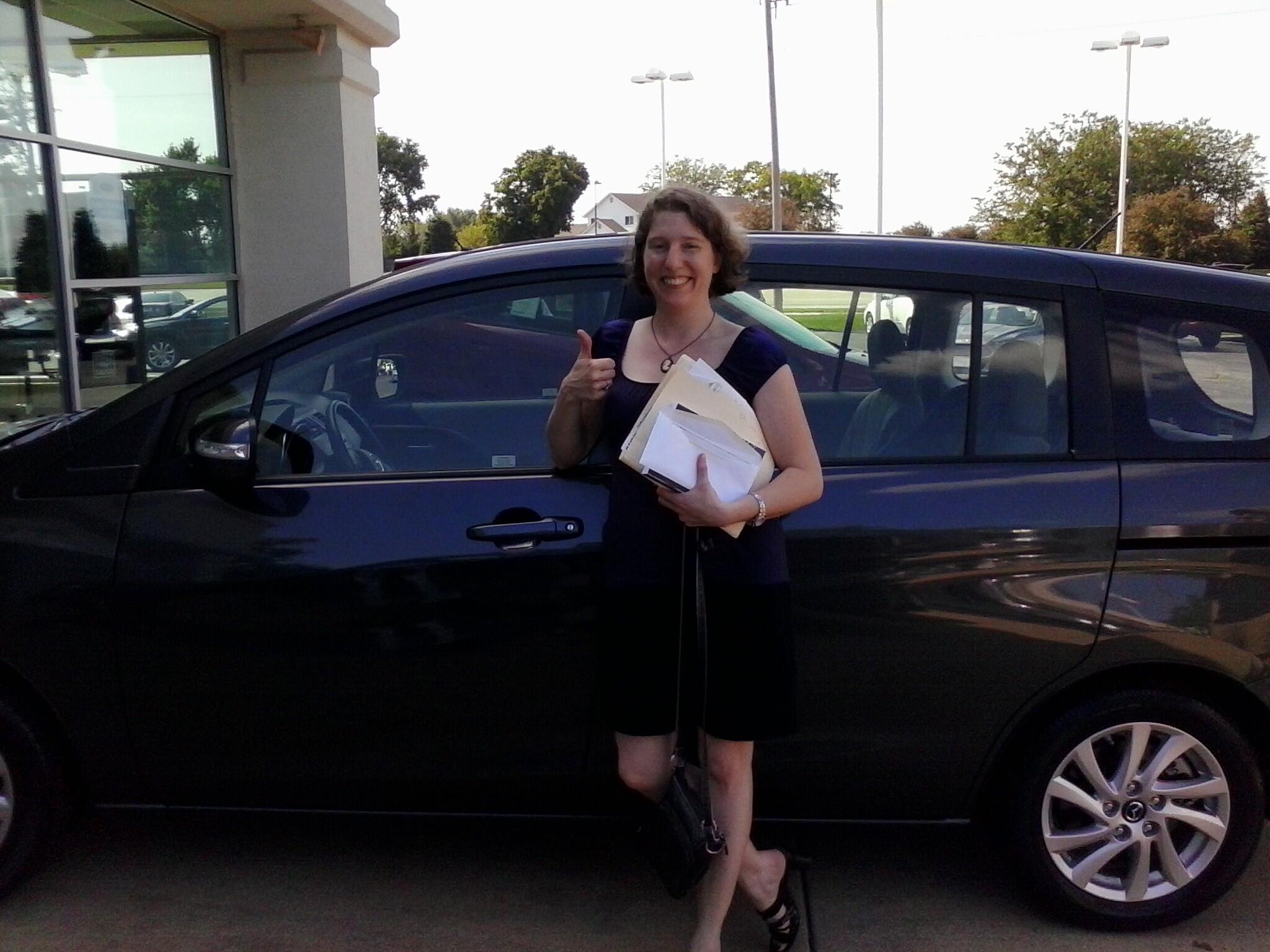 The Mazda is much roomier (kind of like having a mini-minivan), and makes getting Caitlin and her wheelchair in and out of the car SO MUCH EASIER I CAN’T EVEN. Plus, now we have the ability to have people other than us in the car with us! This was not possible in our Saturn, which lost half the backseat and the trunk to Cait’s wheelchair.

Yes, I’m a little sad that the dealer didn’t have a blue one (ours is grey), but that’s okay. I still know it’s bigger on the inside!

Also, it’s new. And under warranty. The peace of mind alone is HUGE. We spent the last couple of years opting not to do things, or having to turn down invitations, because we weren’t sure our car was reliable enough to get us wherever and back. That worry is now gone. 🙂 I cannot begin to explain how happy I am to have a reliable car once more.

2. We got good enough financing on the new car that we didn’t need to use the money I’d set aside for a down payment. Which then was promptly used to pay off the last of my college loans. This? This is huge. Not only does it open up enough budget room to take care of  just over half our new car payment, but it’s psychologically important. I’ve never known life as an adult without my student loan payments. (We still have Michael’s that we’re working on, mind, but that’s his, not mine. And we’re getting there.)

I have finally finished paying for my education. I’ve spent my entire career building upon its value, but it’s finally paid for.

After only 18 years. Yes, there were several breaks for graduate school and financial hardships. But it’s done now. I have now officially lost my usual excuse for when the Alumnae Fund at Smith calls to ask for money.

Yes, I chose to attend a brand-name school and take out loans. My choice. And I have lived with the repercussions of that choice. I don’t generally regret my choice–it led directly to me finding my career calling as a special collections librarian!

I am having some difficulty wrapping my head around this level of milestone, frankly. Along with the whole “job security” thing.  I am so very, very cognizant of how lucky I am to be where I am right now. It may take me a while to even begin to trust it. (I grew up in the 80s and 90s in a working class family. Job security wasn’t a thing I even thought existed.)

I’m officially at the point where my parents always wanted me to be: I have a good life, in a secure job that does not require the sort of backbreaking work that they had to do to get me here. Even if I ended up being a librarian rather than a doctor or lawyer as they’d originally hoped.

Other than the car, we have no other major changes planned. I’m going to upgrade my phone to a smartphone with a modest plan (Michael has his already), and that’s pretty much it. My goal is to keep building savings, and work on paying down the debts we’ve taken on for things like Caitlin’s medication before it was FDA approved.

*raises glass* Here’s to making our 40s a lot less financially fraught than our 30s were. We are not rich by any stretch of the imagination, but we should, over time, be able to do the things that matter to us, if we’re careful and continue to live relatively modestly.

And that is what tenure is worth.