New Verity! Episode 31: More anniversaries (Than You Can Shake A Sonic At) 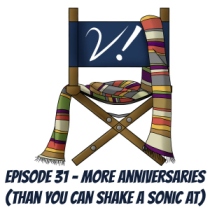 Just when you thought we were done with Anniversary Mania…we jump right back in! Join Deb, Erika, Katrina, and Tansy as we reminisce about the televised anniversary specials of days gone by. There have been a lot of official celebrations of our beloved show. Some were great (according to most of us), and some were…less than that (according to most of us). Who’s not so keen on “The Five Doctors”? Who is super-duper keen on “Dimensions in Time”? Listen and see!

Lynne M. Thomas is a nine time Hugo Award winning editor and podcaster. In her day job, she is Head of the Rare Book and Manuscript Library at the University of Illinois at Urbana-Champaign.
View all posts by Lynne M. Thomas →
This entry was posted in Doctor Who, shameless promotion, Verity! and tagged Doctor Who, Shameless Promotion, Verity!. Bookmark the permalink.